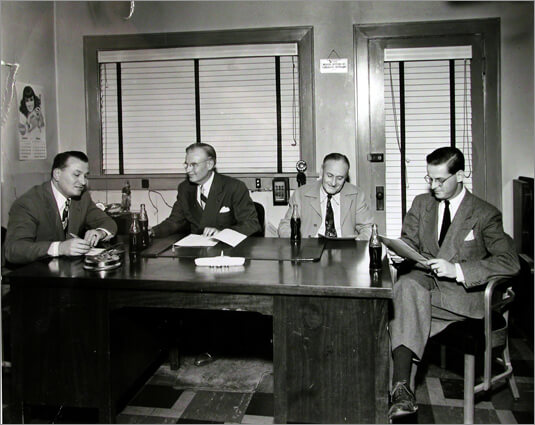 What does a century of refreshment look like? Check out our 100-Year Timeline!

The Rice family is one of the original bottlers that entered an agreement for exclusive franchise rights with the Coca-Cola Company. Always a family-owned business, Mr. Rice, Sr. and his brothers operated the business and in 1939, Mr. Edward E. Heer came on board as sales manager. Mr. Heer was married to Virginia “Tookie” Rice-Heer until his death in 1985. Tookie then assumed the vice presidency of the company, which was later renamed Ozarks Coca-Cola/Dr Pepper Bottling Company.

In 1953, Edwin C. “Cookie” Rice joined the family business and currently serves as Chief Executive Officer. Cookie and his family share ownership of Ozarks Coca-Cola/Dr Pepper. Under their leadership and direction, the company now employs more than 700 people who provide production, warehouse, delivery, and equipment services.

Ozarks Coca-Cola expanded in 2015 with the acquisition of Joplin and West Plains territories from The Coca-Cola Company. In 2017, the Northwest Arkansas franchise was added, further solidifying the company as a major regional provider of refreshing beverages. (See complete market area map)

In 2020 Ozarks Coca-Cola/Dr Pepper celebrated 100 years of family ownership. Additionally that year, a second bottling line was added in Springfield, as well as the construction work on a new 435,000-square-foot distribution center. Products are now manufactured in Springfield and distributed through sales centers in Springfield, Bolivar, Rolla, Joplin, West Plains, and Northwest Arkansas.

The Rice and Heer families, along with their dedicated employees, are committed to sharing the distinct Ozarks Coca-Cola brand of customer service and strengthen the communities they serve.